Soil as a Climate Solution 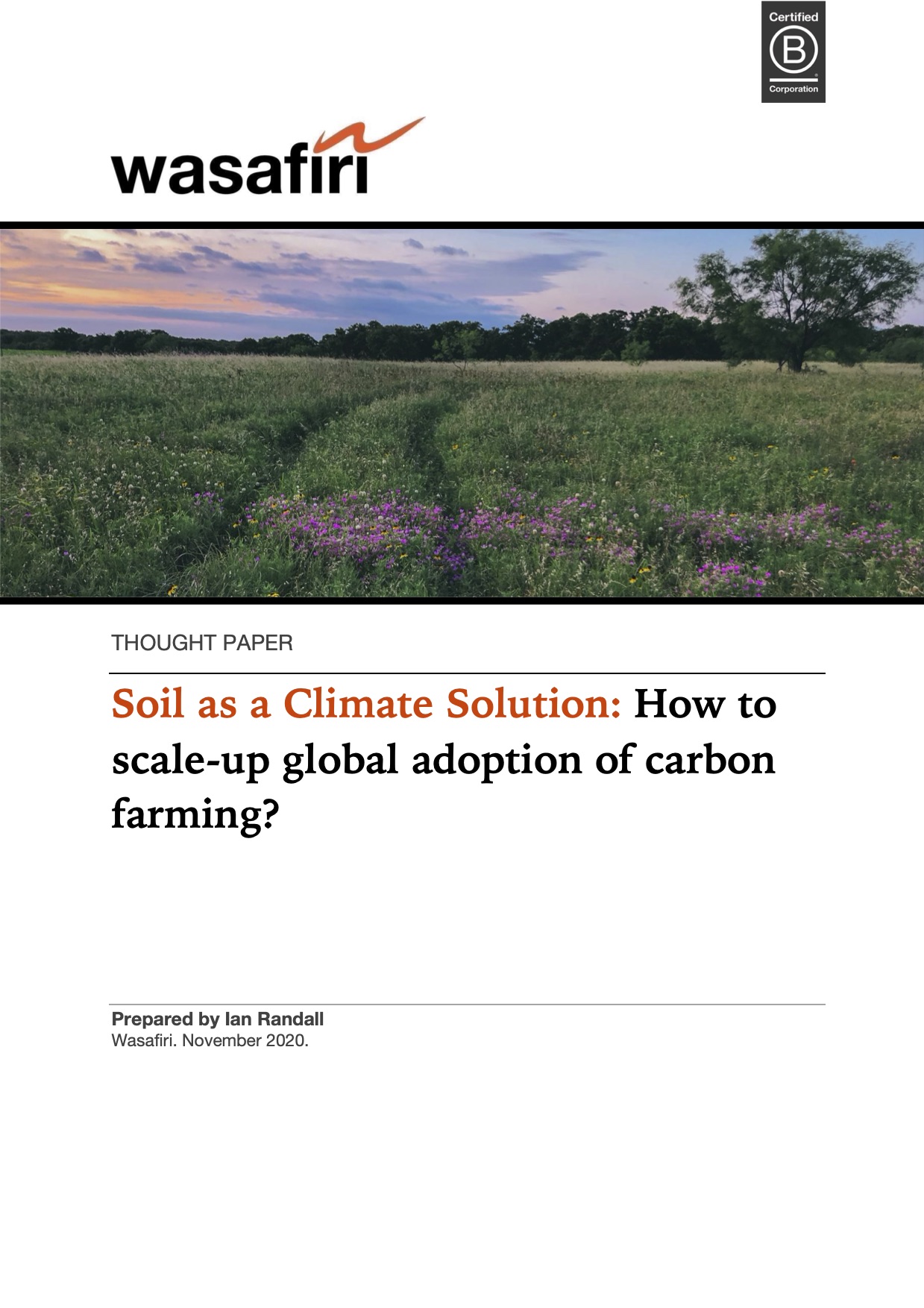 How to scale-up global adoption of carbon farming?

A global effort to improve soil health could help turn our food system from a major source of greenhouse gas emissions to a carbon sink. As the world races to achieve net zero emissions by 2050, wide-scale adoption of carbon farming practices offers a potentially under-utilised pathway towards reversing climate change. Evidence shows that soil carbon sequestration is feasible at farm-level. This paper asks how to transition entire food systems to do the same. Originally written in support of the Race to Zero Dialogues convened by the UN Climate Champions, it is reproduced here as a blog.

Download the original paper: Soil as a Climate Solution. 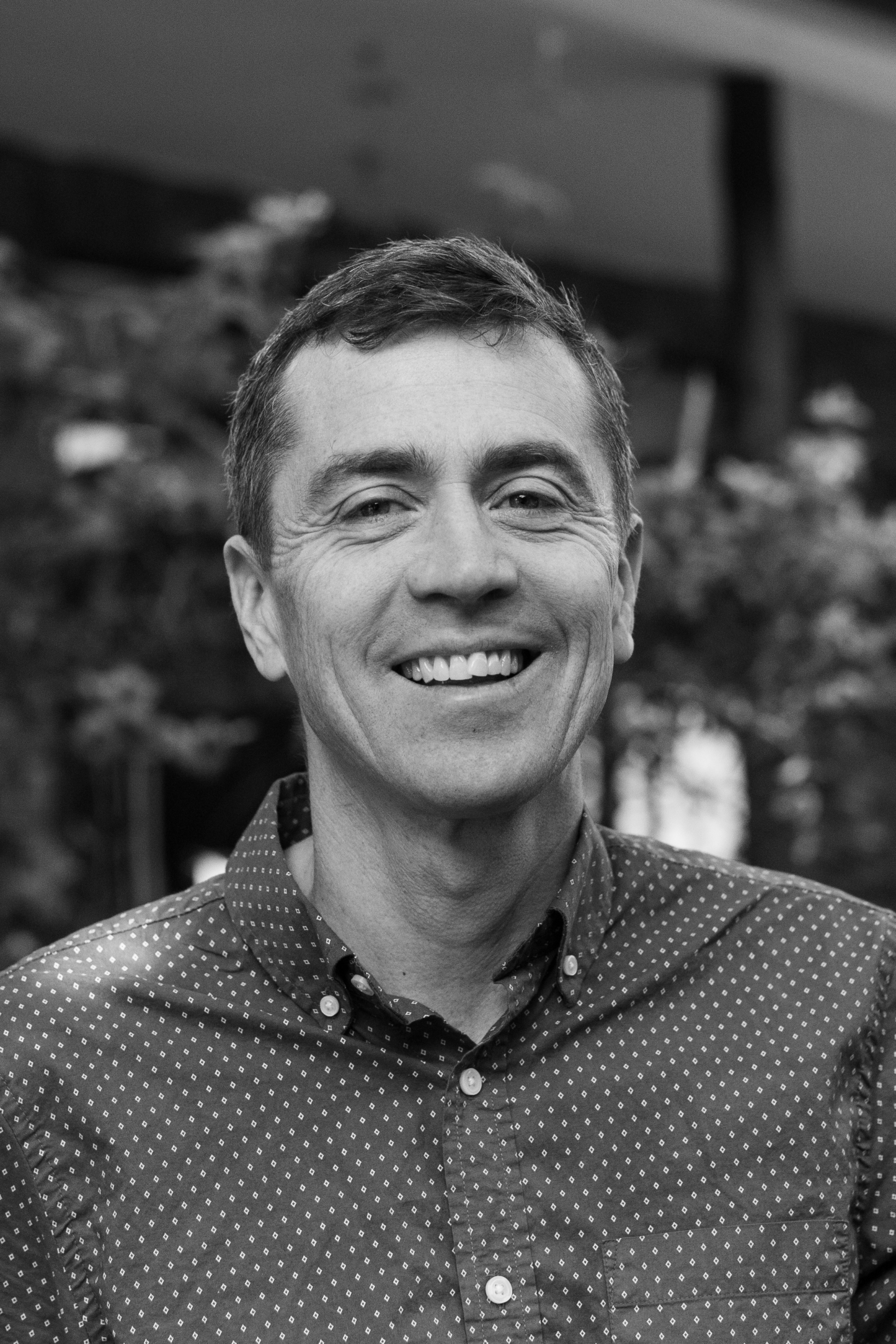 Soil health: a vital pillar of our climate response

The food system is integral to climate change. The world’s food and agriculture sector currently makes a net contribution of about 30% of all greenhouse gases[1]. Emissions must be reduced, for example through more plant-based diets, through productivity gains that reduce expansion of farmlands, and through improved nitrogen-use efficiency of fertilizer. However, unlike other sectors, our food system can become a sink instead of a source of CO2[2] if we shift agricultural practices.

Soil is an enormous storehouse of carbon. Plants and healthy ecosystems have an unparalleled capacity to absorb carbon through photosynthesis and store it in living biomass. This biomass ultimately decomposes into soil, where much of it remains stored – three times more than the atmosphere holds. Agricultural practices can either release soil carbon back into the atmosphere (e.g. through ploughing) or secure it for decades or even millennia through methods such as managed grazing, perennial staple crops, multi-strata agroforestry, cover crops, no tillage, and crop rotation. The importance of such “carbon farming” practices is now better understood due to scientific breakthroughs in soil biology.

Carbon farming can offer a potent climate solution. Whilst experts substantially disagree on the potential scale of soil carbon sequestration and further research is needed, there is an emerging cross-sector consensus that it must become a vital pillar in our suite of climate responses[3]. The most optimistic analyses project that shifting agricultural practices could “drawdown more than 100% of current annual CO2 emissions.”[4] Conservative estimates still project an important contribution of capturing roughly 15% of annual emissions.[5]

Investing in soil health offers positive returns for public and private goods. Importantly, soil carbon is a proxy for soil health, so that carbon farming delivers multiple co-benefits including for biodiversity, nutrition, water retention and quality, lower emissions, and farmer profitability[6]. Some experts question whether the well-evidenced farm-level gains in soil carbon actually translate into sustained system-level sinks – either because eventually farmers might release the carbon through ploughing, or because carbon gains are off-set by carbon losses elsewhere[7]. Whilst this raises legitimate areas for further research, the wider expert opinion is that investing in soil health is a bet worth making on a global scale. The benefits are so numerous, with real potential to mitigate emissions and enhance resilience in response to the climate crisis.

Transitioning to carbon farming practices should not be under-estimated. Much of our food system is based on industrial agriculture, which through hyper-efficient nutrient-mining provides low-cost food to billions of people. Even as the limits of this paradigm become apparent, there will be enormous structural inertia to change – exerted through consumer expectations, entrenched commercial interests, farmers cautious about change, and a policy environment designed to serve the status quo. Improving soil health by increasing biomass is no longer the passion of small numbers of pioneering farmers and ranchers, but nonetheless remains outside of the mainstream.

The foundations for system change are in place. Unlike many climate solutions, the science, the politics and the economics all align behind investing in soil health. It requires scaling age-old practices, not unproven technology. Since the Paris Agreement and the launch of the 4 per 1000 Initiative, a growing number of influential institutions are advocating for and indeed implementing soil carbon sequestration. Nonetheless, given the scale of the climate threat, the current investment of financial and political capital is underwhelming. Incremental change is not enough. Systemic change is needed to ensure agricultural practices consistently regenerate instead of degrade soils. Farmers and ranchers are central to this transition. And there is no time to lose. 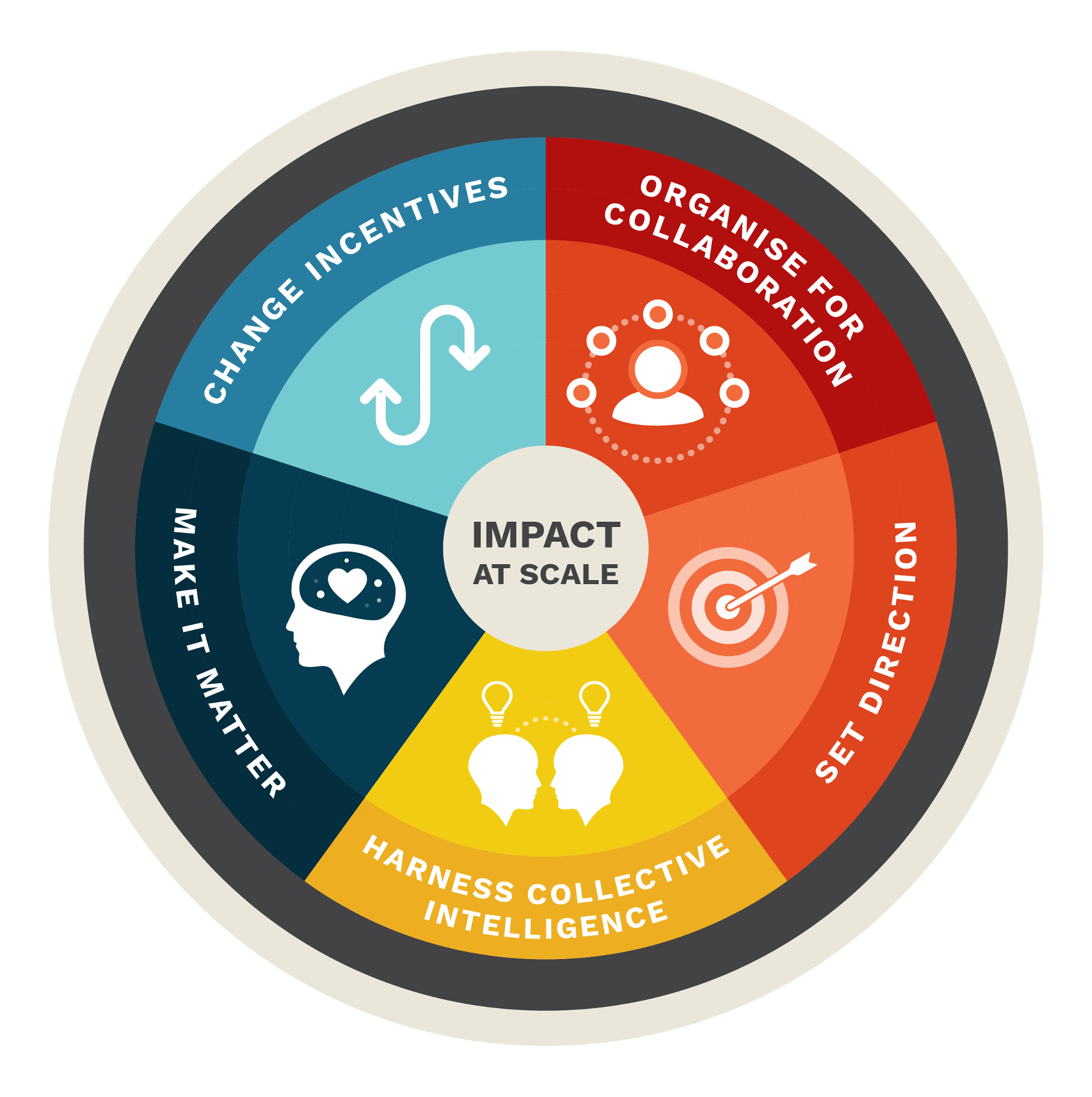 How to unlock a global transition? Technical solutions exist to sequester soil carbon in every agro-ecological niche[8]. And pioneer farmers and ranchers are making this work commercially. The puzzle is how to now transition entire food systems to favour such practices, so that they scale up. Evidence and technical expertise will not cajole the system into changing. Instead, leadership is needed to create an enabling environment from which change emerges. Year on year, we must nurture a movement, forge new coalitions, create incentives, experiment and learn, and sell the opportunity far and wide. When seeking system change on complex problems, the Systemcraft framework[9] invites exploration of five dimensions (see figure) through which to build the collective and adaptive effort required for impact at scale. It prompts key insights as we ask, “what next?” in order to scale up carbon farming.

Change the incentives: It is farmers and ranchers who must adopt new practices, so they must be at the heart of any systemic transition. Their dominant practices result from a web of incentives, ranging from subsidies, to consumer expectations, the agronomic paradigm and supply chain structures. A tipping point will only occur when such incentives instead favour practices that sequester carbon. Ultimately, farms must be more profitable when they store rather than withdraw at the great carbon bank that is soil. At that point, the most successful farmers will be those who innovate the best mix of practices for their specific ecological and market context. This rewiring of incentives must reward agriculture that delivers public goods, rather than hides externalities such as for water, climate or health. There are countless levers for shifting incentives: subsidy reform; carbon markets; ESG investment, lower insurance premiums; product certification; affordable measurement and verification of soil carbon. Some can be advanced globally, but many will need national efforts.

Organise for collaboration: The current system is maintained by all its constituents – consumers, buyers, input providers, policymakers and scientists, with farmers and ranchers at the centre. A critical mass of these will need to collaborate in reforming the food system that is largely working for them. That requires focussed coordination, anchored in the farming community with a strong mandate across the food system. Resistance to change will come in silent and explicit forms, often with legitimate concerns. The soil carbon movement will need to anchor itself in well-resourced, trusted backbone organisations at national-level, networked together to enable learning and advocacy at a global-level.

Set the Direction: Structural inertia makes system change hard. It is more likely when collaborators unify their efforts behind a very specific agenda. Soil carbon sequestration provides a targeted focus through which to achieve much broader goals related to soil health and forging a more sustainable and inclusive food system. It also immediately implies a focus on those agro-ecological regions where the science, politics and economics all signal the greatest potential for sequestration. Can the soil carbon movement coalesce behind some measurable, achievable, time-bound targets in those geographies?

Harness collective intelligence: Changing our food system is full of risks and opportunities. There will be unintended consequences. Perhaps, for example, introducing rotational grazing forces some crop harvests to be grown on new land.[10] Equally, innovations will emerge that deserve wide-scale adoption. Evidence and practice must dance together. A soil carbon movement must facilitate learning and communication across stakeholders and geographies to ensure positive net impacts for farmers, society and our ecosystem.

Make it matter: Our current food system is underpinned by an agricultural paradigm that emerged in the mid-20th Century, harnessing new breakthroughs in chemistry and engineering to affordably feed burgeoning urban populations.[11] Carbon farming practices build from both indigenous and new 21st Century understanding of biological processes and how nature-based solutions work to sustain productive ecosystems at both farm-level and globally. Transitioning the food system requires a fundamental mindset shift to farming as ecological stewardship, in which food is grown in ways conducive to life. The pathway to system change will unfurl if the soil carbon movement draws in diverse stakeholders behind an inspiring narrative about the many benefits of a reimagined food system.

What next? Possible actions to accelerate adoption of carbon farming

In 2021, the soil carbon movement must solidify around bold actions. Next year, two major global events will demand unprecedented levels of international cooperation on reversing climate change and sustainably nourishing humanity – the 26th UN Climate Change Conference of Parties, and the UN Food System Summit. They offer vehicles for committing leading cross-sector actors to collaborate on a multi-pronged effort to scale up carbon farming. The rest of this paper offers a menu of potential ideas to provoke discussion and inspire further ideation. No single intervention will trigger an adequate global transition, but together some combination of such actions just might make all the difference.

If you or your organisation want to help build a soil carbon movement, please contact the paper’s author to explore next steps: Ian Randall, Director, Wasafiri, ian@wasafirihub.com.

Wasafiri Joins Over One Thousand Leaders Across the United States Affirming...
Scroll to top